In this issue of the Blood-Letter: a preview of our March speaker Phillip Margolin, awards news, and more!

Mr. Margolin grew up in New York, and graduated from The American University in Washington, D.C. . He was a Peace Corps volunteer in Liberia from 1965-1967. In 1970 he graduated from New York University School of Law. He moved to Oregon to clerk for Herbert Schwab, the Chief Justice of the Oregon Court of Appeals. He was in private practice from 1972 until 1996 in Portland, specializing in criminal defense at the trial and appellate levels. He has appeared before the United States Supreme Court, the United States Court of Appeals for the Ninth Circuit, the Oregon Supreme Court and the Oregon Court of Appeals. He has represented approximately 30 people charged with homicide. He was the first Oregon attorney to use the Battered Women’s Syndrome to defend a battered woman accused of murdering her spouse. 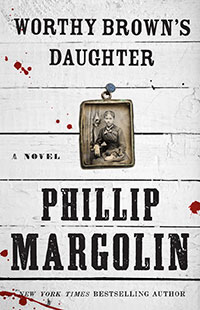 Since 1996 he has been writing full-time. His first novel, Heartstone, was nominated for an Edgar for best original paperback mystery of 1978 by the Mystery Writers of America He was also the 2009 Spotted Owl Award winner for Executive Privilege.

We hope you will be able to join us for what promises to be an intriguing presentation. The program will begin at 7:30 pm at Terwilliger Plaza. Directional signs will be posed in the building. The meeting is free and open to the public. Free parking is available in the Terwilliger Plaza employee parking lots across 6yh Avenue from the lower level entrance, and on Sheridan Street. Handicapped parking is available at the upper level entrance. Tri-Met bus #8, Jackson Park, stops just in front of the lower level entrance.

Next year’s convention will be held in Portland, Oregon. More information will be available in future newsletters.

The Spotted Owl Committee is closing in on selecting their 2014 winner, who will be announced at the upcoming Bloody Thursday meeting.

Those of us who live in the Portland area are lucky that many mystery authors come through to do readings/signings at local bookstores. Another way to see a lot of your favorite authors is to go to a conference that showcases the mystery genre. Here are some upcoming conferences that you should check out.

As you can see, you can plan to attend one close to home or make a real vacation of it and travel across the pond.

Friends of Mystery is happy to publish news and press releases from our members in our Member News section, with the following considerations:

Members and readers are encouraged to submit book or film reviews, comments on authors, and recommendations for books to read or questions about mysteries, crime fiction and fact. If you have suggestions of mysteries worth sharing, please contact the editor at: jvoss@pcez.com

Sign up now to get our newsletter and event announcements by email. Our newsletter is published five times per year, and we'll send an event reminder about a week ahead of time. At no point will we flood your inbox though. Promise!

Our 2022-2023 Season opened with 2022 Spotted Owl Winner Warren Easley. Past Spotted Owl winners John Straley and Mike Lawson join us in November and January. Then in March, we’ll be chatting with Sherry Thomas, author of the Lady Sherlock series. May is still to be determined.

Bloody Thursdays will be continue to be hosted online with Zoom. Sign-up for our newsletter to get more details.

This website uses cookies to improve your experience while you navigate through the website. Out of these cookies, the cookies that are categorized as necessary are stored on your browser as they are essential for the working of basic functionalities of the website. We also use third-party cookies that help us analyze and understand how you use this website. These cookies will be stored in your browser only with your consent. You also have the option to opt-out of these cookies. But opting out of some of these cookies may have an effect on your browsing experience.
Necessary Always Enabled
Necessary cookies are absolutely essential for the website to function properly. This category only includes cookies that ensures basic functionalities and security features of the website. These cookies do not store any personal information.
Non-necessary
Any cookies that may not be particularly necessary for the website to function and is used specifically to collect user personal data via analytics, ads, other embedded contents are termed as non-necessary cookies. It is mandatory to procure user consent prior to running these cookies on your website.
SAVE & ACCEPT