In this issue of the Blood-Letter: a preview of our November guest, Gregg Olsen, award nominations, mystery magazines, and more! 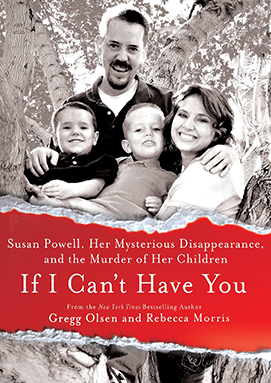 The Deep Dark was named Idaho Book of the Year by the ILA, and Starvation Heights was honored by Washington’s Secretary of State for the book’s contribution to Washington state history and culture.  His Young Adult novel, Envy, was the official selection of Washington for the National Book Festival.

His most recent books are The Girl in the Woods (A Waterman & Stark Thriller), published in October, and If I Can’t Have You: Susan Powell, Her Mysterious Disappearance, and the Murder of Her Children, released in May 2014, and co-authored with Rebecca Morris.

Please plan to join us for what promises to be a compelling presentation.  The program will begin at 7:30 pm at Terwilliger Plaza.  Directional signs will be posted in the building.  The meeting is free and open to the public.  Free parking is available in the Terwilliger Plaza employee parking lots across 6th Avenue from the lower level entrance, and on Sheridan Street.  Handicapped parking is available at the upper level entrance.  Tri-Met bus #8, Jackson Park, stops just in front of the lower level entrance.

Our membership chair, Nancy Thomas, has had to step down from her post after many years of service to Friends of Mystery.  We are looking for someone who would be willing to take over these duties, which would involve computer skills using Excel.  If you are willing to help out, please contact Jeannette Voss by email at jvoss@pcez.com or Carrie Richards at Carrieschindler@aol.com.

Spotted Owl Committee Is Reading Both Returning and New Authors

Since our update in the last newsletter, we are looking forward to reading some new books recently published from some familiar authors and several new ones:

How do you decide what mystery you’re going to read next?  There are two magazines you may not be aware of that review mysteries.

I have subscribed to Mystery Scene for several years, and it is a good source of book reviews and articles about mystery authors – in fact the current issue features, among others, one of my favorites, Louise Penny.  The magazine is in color and on very good quality paper.  It’s available by subscription, and you can usually find it at Barnes & Noble and Powell’s.  Mystery Scene is published five times a year.

Deadly Pleasures is another great source of book reviews and articles, and it is published quarterly.  I have never seen it locally since Murder By The Book closed, so I recently subscribed and received my first issue.  It is mostly in black and white, and the paper isn’t as high a quality, but I found it to be jam-packed with reviews.  One of the interesting features was “Reviewed to Death”, where the same book was reviewed by eight different people, and the differences of opinion ratings ranged from A to C.  I’m really looking forward to receiving my next issue.

If you have a mystery review source to share, let us know!

Readers of Deadly Pleasures present their awards at Bouchercon.  Among their nominations for 2014 are:

Friends of Mystery is happy to publish news and press releases from our members in our Member News section, with the following considerations:

Members and readers are encouraged to submit book or film reviews, comments on authors, and recommendations for books to read or questions about mysteries, crime fiction and fact. If you have suggestions of mysteries worth sharing, please contact the editor at: jvoss@pcez.com

Sign up now to get our newsletter and event announcements by email. Our newsletter is published five times per year, and we'll send an event reminder about a week ahead of time. At no point will we flood your inbox though. Promise!

Our 2022-2023 Season opened with 2022 Spotted Owl Winner Warren Easley. Past Spotted Owl winners John Straley and Brett Battles join us in November and January. Then in March, we’ll be chatting with Sherry Thomas, author of the Lady Sherlock series. Mike Lawson will join us in May.

Bloody Thursdays will be continue to be hosted online with Zoom. Sign-up for our newsletter to get more details.

This website uses cookies to improve your experience while you navigate through the website. Out of these cookies, the cookies that are categorized as necessary are stored on your browser as they are essential for the working of basic functionalities of the website. We also use third-party cookies that help us analyze and understand how you use this website. These cookies will be stored in your browser only with your consent. You also have the option to opt-out of these cookies. But opting out of some of these cookies may have an effect on your browsing experience.
Necessary Always Enabled
Necessary cookies are absolutely essential for the website to function properly. This category only includes cookies that ensures basic functionalities and security features of the website. These cookies do not store any personal information.
Non-necessary
Any cookies that may not be particularly necessary for the website to function and is used specifically to collect user personal data via analytics, ads, other embedded contents are termed as non-necessary cookies. It is mandatory to procure user consent prior to running these cookies on your website.
SAVE & ACCEPT